G20 should select universal issues for discussion at Bali… 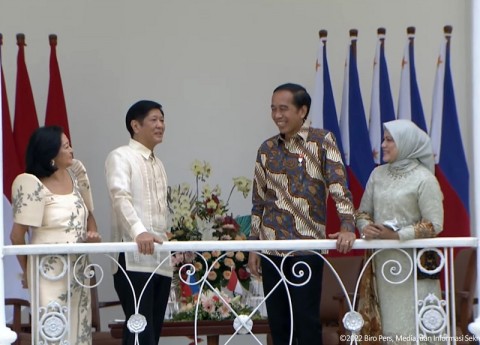 As broadcast by the Presidential Secretariat’s YouTube channel, the Philippine presidential entourage arrived at the palace at 10 a.m. local time (UTC +7) and was welcomed by the presidential cavalry and marching band.

Thereafter, the two heads of state attended the welcoming ceremony where the national anthems of Indonesia and the Philippines were played, followed by a troop inspection.

Moreover, Ambassador of Indonesia to the Philippines Agus Widjojo and Foreign Affairs Ministry’s Director General of Asia-Pacific and African Affairs Abdul Kadir Jailani were present to welcome the Philippine head of state.

The two heads of state are expected to plant trees, be present at bilateral meetings conducted by respective delegates, and observe the signing of memoranda of understanding between both countries.

Jokowi and Marcos are also expected to present their press statement on Indonesia-Philippines relations and bilateral cooperation.

President Marcos and First Lady Araneta-Marcos arrived in Indonesia on Sunday (September 4) and were welcomed by Minister of Communications and Informatics Johnny G. Plate at the Soekarno-Hatta International Airport.

The Philippines presidential entourage had earlier visited Kalibata Heroes Cemetery in South Jakarta to lay a wreath and pay homage to the national heroes.  (Idnpost/Antara)