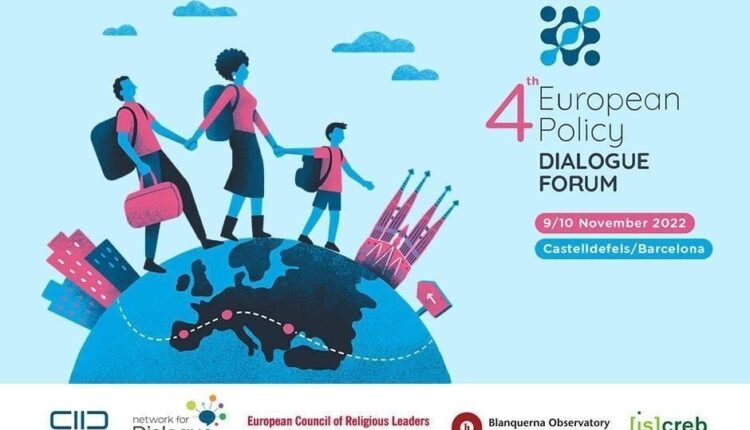 Barcelona, ​​November 9 (Indonesianpost.com) – The European Forum for Dialogue on Refugee and Migrant Policies kicked off today, Wednesday, in Barcelona, ​​Spain, under the title “Social Integration in Cities: Strengthening Multiple Partnerships to Disseminate a Culture of Dialogue between Communities”.

The Forum is attended by the Center for Global Dialogue (KAICIID), the Blanquerna Observatory for Media, Culture, and Religion, the European Council of Religious Leaders of Religions for Peace in Europe (ECRL/RfP Europe), and the Higher Institute of Religious Studies of Barcelona (ISCREB), and is supported by the Office for Democratic Institutions and Rights Among the speakers are the High Commissioner for Migration in Portugal and the OSCE Chair for Tolerance and Non-Discrimination.

Annually bringing together civil society actors, policymakers, representatives of faith-based values ​​organizations, and academic experts to discuss the most pressing issues related to the integration of refugees and migrants across Europe, the fourth edition of the Forum will be attended by over 100 participants from more than 30 diverse countries.
This year participants will discuss the role of the media in combating hate speech as well as the importance of multi-partner partnerships to support the social integration of migrants in European cities. They will also examine the roles of different partners – from journalists to policymakers and faith communities – and the importance of their working together to build more inclusive societies.

“Governments and multilateral actors cannot act alone to promote a commitment to social inclusion in all European cities,” said Dr. Zuhair Al Harthy, Secretary General of CAISED. To tackle this great task, we also need to expand cooperation with religious communities and civil society representatives. and activists at the grassroots level. Building on the European Forum for Dialogue on Refugee and Migrant Policies, we seek to increase participation among all these partners, amplify their voices, exchange all diverse perspectives, and discuss methods of cooperation in a more effective way.”

The huge number of people arriving in Europe fleeing poverty, war, violence, or insecurity makes integration a critical issue, said Myriam Diez Bosch of the Blanquerna Observatory. The European Forum for Dialogue on Refugee and Migrant Policies is a key area in this regard, as it brings together actors from different fields with a common goal of integrating migrants. This year’s edition – which focuses on the role of the media – is very appropriate, since migrants’ contact with citizens of the world originates primarily from these places, and it is the responsibility of journalists to present and describe these groups without any labels or classifications.

It is worth mentioning that the Center for Global Dialogue (CAICED) is an international multi-governmental organization that encourages dialogue to build bridges of peace in conflict areas, by promoting understanding and cooperation between people of different cultures and religions. The Kaiseed Board of Directors is composed of prominent representatives of five major world religions, namely Islam, Buddhism, Christianity, Hinduism, and Judaism. Kaiseed’s vision is to build a world of respect, understanding, cooperation between people, justice and peace, and an end to the misuse of religion to justify oppression, violence, and conflict, while the Blanquerna Observatory of Media, Culture, and Religion is a multidisciplinary platform for research and dissemination of information and activities related to communication and religion, and the Observatory examines the links between culture Folk and spiritual aspects of society.

The Dialogue Network is a Europe-wide platform launched to bring together actors in the field of religion and civil society to promote the use of dialogue and to develop more effective recommendations for social inclusion policies for migrants and refugees in Europe. The network, which was established with the support of Kaiseed, currently has 25 members from 15 diverse countries.