Ministry of Manpower is to host G20 Minister Manpower… 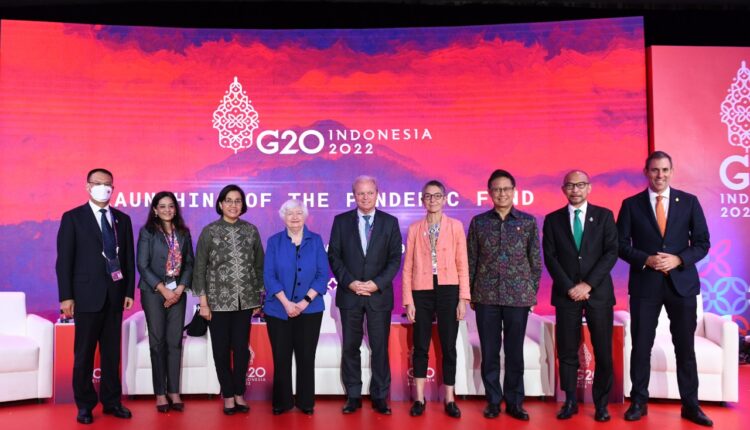 Bali, Indonesianpost.com – The Pandemic Fund, which was initially known as “the Financial Intermediary Fund for Pandemic Prevention, Preparedness, and Response (FIF-PPR),” was officially launched by the President of the Republic of Indonesia, Joko Widodo (Jokowi), in Bali.

A pandemic must no longer take many lives and bring down the development of the global economy. For this reason, the Indonesian G20 Presidency continues to push for a global health architecture where the world must have the financial capacity to prevent and deal with pandemics, and build a healthy ecosystem synergized across countries.

Regarding the funding required of USD 31.1 billion for pandemic PPR based on the results of a study by the World Bank and the World Health Organization, the Indonesian G20 Presidency through the G20 Health-Finance Joint Task Force, has provided concrete results with the establishment of the Pandemic Fund on September 8, 2022. To date, more than USD 1.4 billion of financial commitments have been made by 24 donors from G20 countries, non-G20 countries, and philanthropic institutions. The commitment is expected to continue to grow as global trust and interest in contributing to the fund increase.

At the Launching, President Jokowi thanked the collective, sustainable and committed efforts that had been made, especially to donors from both G20 and non-G20 member countries, as well as philanthropic institutions that had contributed to the Pandemic Fund. In addition to financial contributions, President Jokowi also invited all parties to support several initiatives related to global health, such as establishing a health emergency response coordination platform. “The establishment of the Pandemic Fund and the early commitment of contributions was the first crucial step. However, we still have a lot of work to do to make sure the fund would achieve its goals”, emphasized President Jokowi.

The Minister of Finance also said that the Pandemic Fund would be targeted as a catalyst for long-term sources of funds for pandemic countermeasures, incentives for countries to increase their investment in PPR, and strengthening coordination between international organizations. “The Pandemic Fund will play a key role in bridging cooperation between G20 members, both developed and developing countries, non-G20 members, and stakeholders, including philanthropists, the private sector, and civil society organizations,” said Minister Sri Mulyani.

President World Bank, Malpass congratulated Indonesia for hosting 2022 G20 Presidency and shared his appreciation for the pledge commitments from the sovereign and non-sovereign donors to strengthen the Pandemic Fund. Malpass stated, “The Pandemic Fund is a testament to the possibilities of global coordination.” He also urged countries to contribute to the Fund.

The Pandemic Fund will be managed jointly by contributors and representatives of recipients and other partners using the World Bank’s management mechanism (Trustee). Strategic arrangements, including the allocation of funding and governance of the Pandemic Fund, are carried out by the Governing Board led by the co-chairs, Muhammad Chatib Basri from Indonesia and Daniel Ngajime, Minister of Health of Rwanda. Meanwhile, technical guidelines for implementation, including the secretariat, will involve WHO.

At the high-level panel session on PPR management, Chatib Basri as the co-chair emphasized that the establishment of the Pandemic Fund is essential in the international community’s efforts to align and close the gap between real achievements and financing targets. Moreover, it is a crucial first step in ensuring the world is better prepared to prepare for, prevent and respond to the next pandemic. “We are trying to ensure that this funding will add value to pandemic PPR financing,” said Chatib Basri.

Financing from the Pandemic Fund could be used to incentivize countries to invest more in pandemic PPRs, including through the Multilateral Development Banks (MDBs), to further leverage concessional and domestic resources. “Avoiding future pandemics requires a much larger investment in pandemic PPR. This investment will help prevent the much higher costs that the world will incur if we are not prepared to face the next global health crisis,” added Chatib Basri.

Minister of Health Indonesia, Budi Gunadi Sadikin said that The Pandemic Fund is a critical milestone in the betterment of global pandemic prevention, preparedness, and response (PPR). It should catalyze long-term PPR financing, encourage countries to further invest in pandemic PPR, and enhance coordination among advanced and developing members of the G20, the non-G20 members, as well as other non-sovereign entities. “Indonesian Presidency is coming to an end. We have walked upon the path that is the footstep of the Italian Presidency, and we will surely leave footprints for the next Presidency, we hope India as the next Presidency, could bring us to a better world, a wealthier world, and for a safer world, for generations to come,” ended Minister Budi.

This launching has demonstrated to the world that the G20 is able to produce concrete actions that can have a global impact. Indonesia will continue to be involved actively in the Pandemic Fund deliberations, including with all relevant stakeholders, as part of our collective efforts to strengthen the global health architecture.