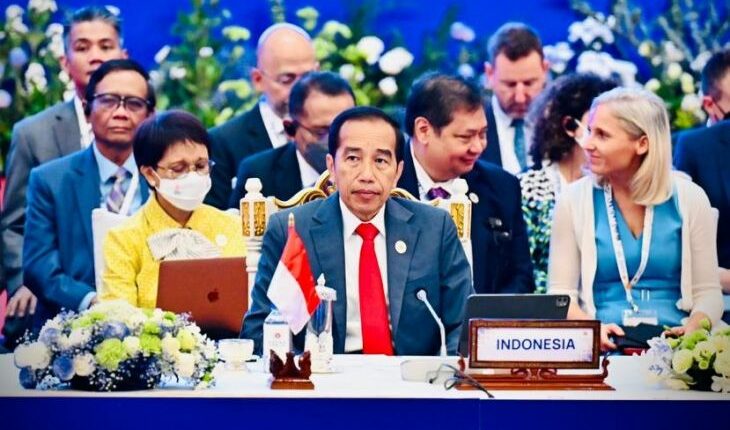 Jakarta, Indonesianpost.com – President Joko Widodo (Jokowi) has encouraged East Asian countries to actively contribute to ASEAN in a bid to improve the foundations of peace in the Indo-Pacific region.

He noted at the 17th East Asia Summit, in Phnom Penh, Cambodia, on Sunday, that for the last five decades, ASEAN had been actively trying to maintain stability and peace in the region.

“The countries of the East Asia Summit must improve the foundations of peace in the Indo-Pacific instead of sowing seeds of enmity, or even beating the drums of war. The Indo-Pacific should not only be seen from a narrow perspective of security politics, but the potential for economic cooperation,” the president said in an official statement received here.

President Jokowi said there were at least three things that could be conducted as a follow-up to the East Asia Summit, the first of which was strengthening the spirit and paradigm for collaboration.

He opined that East Asian countries must accommodate mutual trust between states.

“The culture of cooperation must be improved to overcome various challenges in the region. Thus, I compel us to improve concrete cooperation, in line with the ASEAN Outlook on the Indo-Pacific. I compel East Asian countries to participate in the Indo-Pacific Infrastructure Forum next year in Indonesia,” Jokowi noted.

Second, he believed that East Asian countries must respect the rules in international relations, such as the United Nations (UN) Charter, and international legal instruments such as UNCLOS which must always be adhered to.

“Respect for sovereignty and territorial integrity cannot be compromised or negotiated,” he added.

And the third is efforts to create an inclusive regional architecture.

“An inclusive regional architecture will become a strong foundation for cooperation that benefits everyone. The Indo-Pacific must be a peaceful, stable and prosperous region,” he remarked.