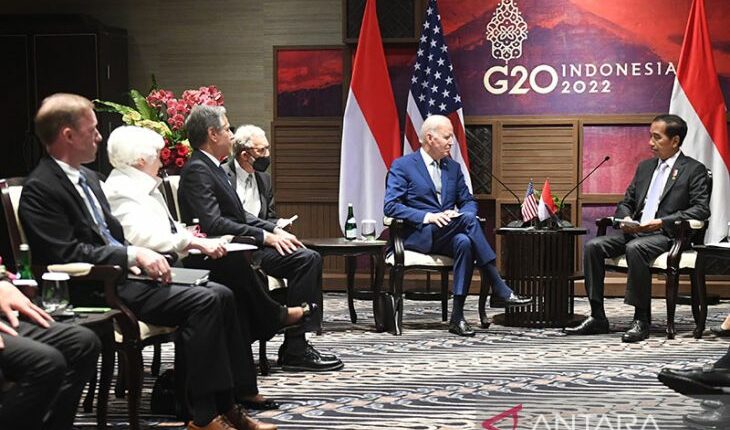 Jakarta, Indonesianpost.com – United States President Joe Biden, during a meeting with Indonesian President Joko Widodo in Bali on Monday, congratulated Indonesia on a successful G20 and its presidency of the grouping.

President Biden congratulated Indonesia on a successful G20 and G20 Presidency, the US Embassy in Jakarta informed in a statement issued on Monday.

During the meeting, President Biden underscored the importance of the US-Indonesia Strategic Partnership and the two leaders discussed ways to strengthen it.

The US President also expressed support for Indonesia’s leadership in the Indo-Pacific as the world’s third-largest democracy and a strong proponent of the international rules-based order.

The two leaders also discussed Indonesia’s upcoming chairmanship of ASEAN in 2023, with President Biden reiterating the United States’ commitment to ASEAN centrality and support for the ASEAN Outlook on the Indo-Pacific.

During the meeting, President Widodo expressed appreciation for President Biden’s joining the G20 Summit in Indonesia.

“President Biden, welcome to Bali. I appreciate your presence at the G20 Summit,” Widodo said.

He also expressed the hope that the G20 Summit would produce concrete cooperation.

“I hope that this G20 Summit will be able to produce concrete cooperation that can help the world in the global economic recovery process,” he said.

The Indonesian government is hoping for flexibility from all participating countries so that concrete commitments can be achieved from the G20 Summit.